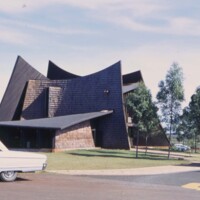 Dole Pineapple built a roadside stand outside Wahiawa in 1951. The first, simple building was replaced by this modern structure in February 1965. Designed by Leo S. Wou, the jagged outline was inspired by the ridges of the Koolau and Waianae mountain ranges visible from the site in central Oahu. The cedar shakes on the exterior referred to the rough skin of a pineapple. A second floor was a "lookout" over the surrounding pineapple fields; this had become a gift shop by 1971

On the night of May 4, 1971, the Dole Pineapple Stand was completely destroyed by fire. A cryptic note left at the scene said it had been burned as an act of political protest, but this could not be confirmed. The stand was rebuilt substantially the same but not identical, with the replica opening on November 1, 1972.