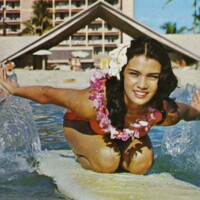 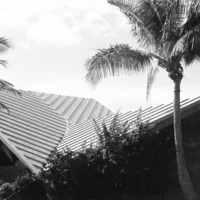 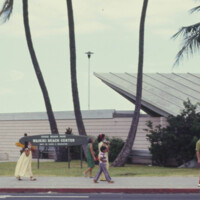 First image: The Waikiki Beach Center ca. 1969. The men's facilities were in the wing on the left and the women's on the right. The Waikiki Biltmore Hotel is visible in the background, across Kalakaua Avenue. The Center was demolished in 1974

Second image: Detail of the roof of the Waikiki Beach Center, 1964. It was fabricated of terne metal, which is steel with a coating of tin and lead, which adds protection against corrosion. This was important directly next to the ocean.

Third image: Detail of the roofline of the Waikiki Beach Center seen from Kalakaua Avenue, 1972. The dramatic angular roof was a notable feature of the Beach Center, which was demolished about May 1981. The site was left open and today is the location of the Duke Kahanamoku statue.