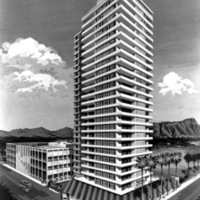 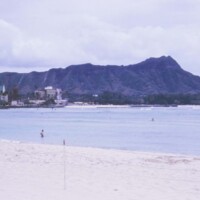 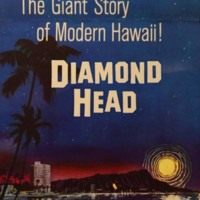 First Image: Rendering of the proposed building. Foster Tower began construction in August 1960, and it opened on October 19, 1962. At 25 stories it was the second-tallest building in Hawaii at the time, with the Ala Moana Building 25 feet taller although it had the same number of floors. Foster Tower contained 136 units, of which 25 were co-op apartments with the majority being hotel rooms. There were 6 units per floor, and each had a full kitchen. Its pool was on its elevated deck. A separate parking structure behind the tower had spaces for 137 vehicles.

Second image: Foster Tower seen from Waikiki Beach in May 1963. As the first tall highrise in Waikiki, surpassing the 10-story buildings already there since 1955, Foster Tower was criticized for its height and for blocking the view of Diamond Head from most of Kalakaua Avenue in Waikiki. It originally had the words "Foster Tower Hotel" painted on its highest point, but they were painted over after complaints, even though they were legal in their size and placement.

Third image: Foster Tower was so prominent in the view of Diamond Head and Waikiki that it appeared in the artwork for posters and other advertising for the 1963 Hollywood film "Diamond Head". It also was seen prominently in the background of one scene shot on the beach, although the plot of the story was supposed to be taking place in 1959 and the building had not been completed until 1962.

Fourth image: Detail view of the wavy concrete canopy of the Foster Tower Hotel over the Kalakaua Avenue sidewalk. This wavy pattern also appeared at the 1958 Windward City Shopping Center in Kaneohe, Oahu. The holes in the canopy originally were for the trunks of coconut palms, now gone, which were already on the site when the building was constructed. Incorporating palms into sidewalk canopies was first done in 1950 for the Royal Block on Kalakaua Avenue at Lewers Street and was popular in the 1950s and '60s.