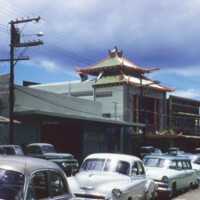 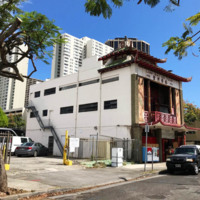 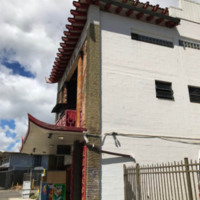 The Lum Sai Ho Tong is a Chinese society for people with the last names Lum, Lin, or Lam (all considered the same, since the same Chinese character was used for all.) Groundbreaking for the Lum Sai Ho Tong Building was December 27, 1952 and it was dedicated on December 19, 1953. It sits on a lot of 2,229 square feet and cost $60,000. It replaced a 53-year old wooden building that had been constructed after the previous one had been damaged in the January 1900 Chinatown fire. The first floor held two retail spaces as well as living quarters for society members who lacked families. The second floor was the "Shrine of Mother Lum" (Tin Hau Temple) and a reception hall and kitchen. The third floor had a meeting / social hall. The Tin Hau Temple used rituals from both Buddhism and Taoism, and when completed was included on walking tours for tourists hosted by the Hawaii Visitors Bureau.

The front view of the Lum Sai Ho Tong Building shows its various ornate traditional Chinese elements, many of which have been modernized to fit the 1950s trends. Thin textured horizontal bricks, popular in the USA at the time, frame the other decorations on either side.

The building was allowed to remain standing while all the buildings around it were demolished around 1962 for the Queen Emma Redevelopment Project (Urban Renewal).

The Lum Sai Ho Tong Building's Chinese elements are only on the facade; in every other way it is a contemporary American-style structure, as this side view shows.