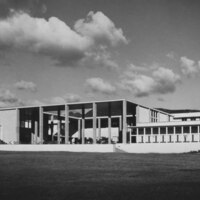 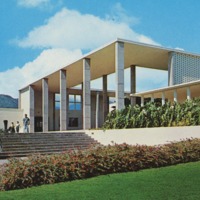 The University of Hawaii Administration building's groundbreaking was on July 22, 1948 and it was completed around May 1949 at a cost of $379,600. It was renamed Bachman Hall on March 25, 1957 after the fifth president of the University of Hawaii, Dr. Paul S. Bachman. He had been the Dean of Faculties until he became the acting president in July or August 1955. He died unexpectedly at the age of 55 on January 9, 1957 after being in the position for only 16 months. In May 1968 during a 10-day sit-in political demonstration, protestors renamed it "Liberation Hall" on a quickly-made banner.

The second image is a postcard of the building around 1955, before it was renamed Bachman Hall.