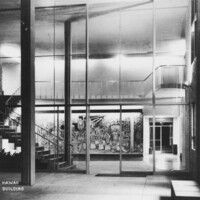 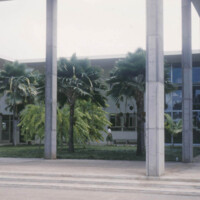 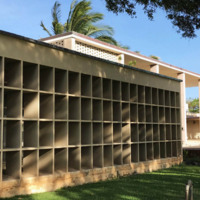 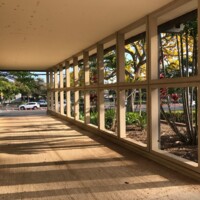 First Image: Postcard ca. 1950. The lobby of the University of Hawaii Administration Building / Bachman Hall has a large fresco mural designed by Jean Charlot, based on research he did on traditional Hawaiian culture at Bishop Museum. It was paid for by donations from the UH classes of 1949, 1950, 1951 and 1952. In late 1949, small sections of fresh plaster daily were applied to the wall and Charlot and two student assistants painted in that portion of the overall picture.

Second Image: Courtyard of Bachman Hall at the University of Hawaii in 1959. The plantings have been changed a number of times over the years.

Third Image: Brise soleil latticework on the left side of the Bachman Hall facade, 2018.

Fourth Image: Open hallway on the makai side the facade of Bachman Hall, 2018.