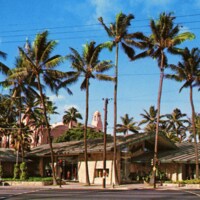 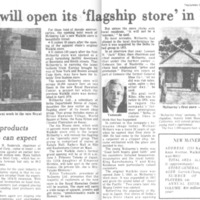 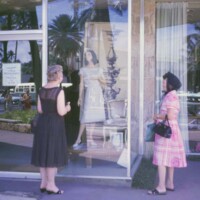 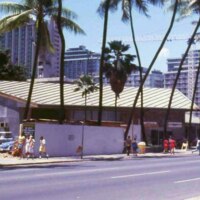 McInerny was an important Hawaii clothing store. Its large Waikiki store's groundbreaking was on April 17, 1957 and its opening on November 18, 1957. This structure replaced a smaller 1950 shop in the next block with three times as much space. The building and its interior fittings cost $1 million, and it was called the "jewel" of the company. The copper roof received an acid wash to give it the desired weathered patina.

Second Image:  The first McInerny store was opened by 20 year old Michael McInerny in 1850, at the corner of Beretania and Smith Streets. He had come to Hawaii as a carpenter on a clipper ship and decided to stay.

Third Image:  Display window at the McInerny Waikiki store; Honolulu, Hawaii, 1961. The McInery Waikiki store had three sections. The facade of the right side had display windows in a zigzag layout; there were 19 show windows in all, and 5 entrances. A replica tiki about 15 feet tall, copied from one in the Bishop Museum, was placed outside the building.