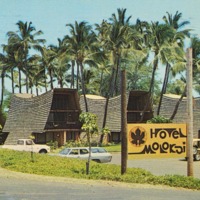 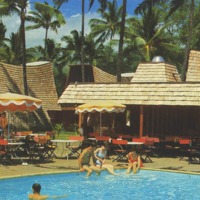 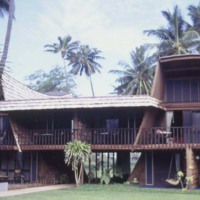 The original structures included the lobby, dining room, bar, pool and gift shop along with 31 guest rooms. The second increment of 21 rooms began construction in May 1967 and opened on September 1, 1967.

Into the 1970s the rooms had no radios, TVs, or phones for a relaxing experience.

The architect, Frank S. Robert (1918-1969), graduated from the University of Oregon, and then studied with Eliel Saarinen at Cranbrook Academy of Art. He came to Hawaii in 1955 and designed the Naniloa Hotel (1966) in Hilo.

The Hotel's architect was also the president of the company which developed it. This company also ran Air Molokai, which flew small planes between Honolulu and Kaunakakai. The Hotel Molokai has been through various owners and has had at least one major renovation in 2008, and it is still open in 2021.

Second image: postcard from 1966 - 1968. A swimming pool was necessary because the beach at the hotel was not good for swimming.