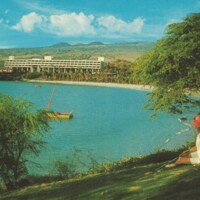 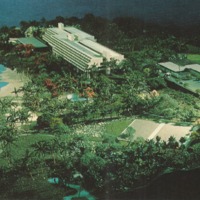 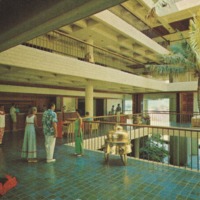 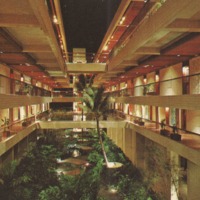 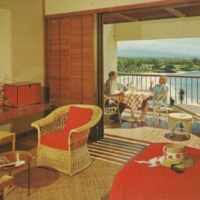 The hotel is completely open on the interior with landscaped gardens and terraces.

The Mauna Kea was developed by Laurance S. Rockefeller. His original concept was a cluster of individual cottages along the beach, with no televisions or air-conditioning to interfere with the natural environment of the Kohala Coast.

The final concept by architects Skidmore Owings Merrill was a single-building refined by lead architect Charles Bassett. Air-conditioning proved to be crucial in the warm, nearly always sunny South Kohala climate. But from 1965 to 1995, the hotel operated without guestroom televisions as Rockefeller had always intended.

When it opened in July 1965 with 154 guest rooms after a $15 million build-out, Mauna Kea Beach Hotel was the most expensive hotel ever built. What were viewed as exorbitant room rates started at $43 per night, including breakfast and dinner in the Pavilion, which featured international cuisine.

A new Beachfront Wing was added in 1968, designed by Honolulu architects Wimberly, Whisenand, Allison, Tong and Goo, with interior design by Phyllis Brownlee. Original paintings by John Young were commissioned for the guest rooms, and the Batik restaurant and Lounge was also added.