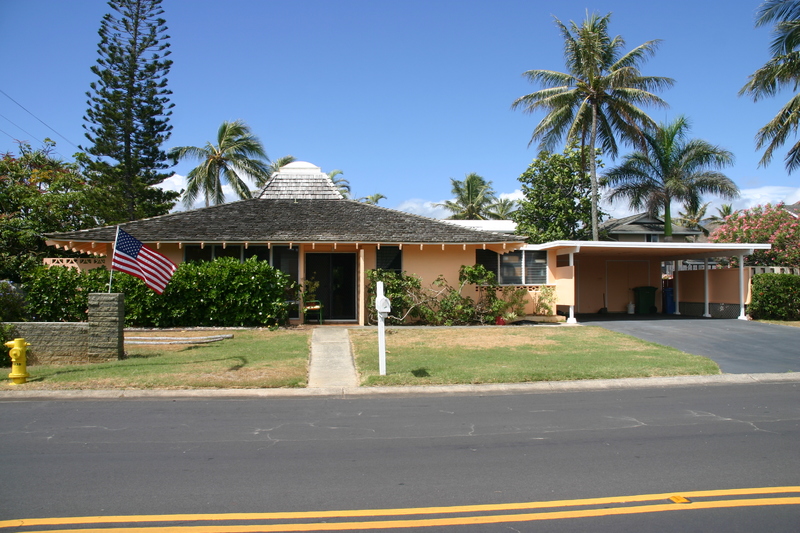 Aikahi Park is located on the windward side of the island in Kailua. It is a relatively small development, consisting of two different units built roughly between 1960 and 1966. Aikahi Park is situated along the southern edge of the Kaneohe Marine Corps Base, with the northern portion of Aikahi Loop running parallel to the edge of the Base. The subdivision’s boundaries create an upside-down triangle, with Aikahi Loop as the base, and Kaneohe Bay Drive and Mokapu Road as the as the mauka and makai legs, respectively. The main entrance to the subdivision is at the intersection of Mokapu Road and Aikahi Loop. Two rough-faced concrete brick walls with mosaic tile signs demarcate the entrance. The font on the signs is consistent with the logo used in subdivision advertisements from the 1960s.

The first phase of Aikahi Park was approved by the city planning commission in September 1960. It was to include 271 homes built by Centex-Trousdale and designed by Vladimir Ossipoff. An article in The Honolulu Advertiser from September 1962 announced the opening of four Aikahi Park model homes, and described the subdivision as a “prestige home development designed for families growing in stature and size.” The homes were designed in “Hawaiian styles with three and four bedrooms, the latter containing fireplaces.” Attractive features included double wall construction with Wolmanized framing, all-electric appliances, separate master suites with full baths, tile floors, fenced lanais, two-car garages and concrete driveways. All of the homes in Aikahi Park either had an integrated or an attached two-car carport. Many attached carports had a decorative concrete block or wooden screen wall facing the street. Homes in the first unit of Aikahi Park featured low pitched gable roofs with exposed beams or gable-on-hip roofs. Neighborhood amenities included underground utilities, a city and county sewer system, paved streets and curbs, close proximity to shopping centers, schools, churches and beaches, and a mere half an hour drive to Honolulu. According to Centex, the development’s winding roads and buried power lines made it a “lovely livable park.” Prices ranged from $25,050 to $27,350 with down payments as low as $800 with VA financing and $2,500 with FHA financing. Newspaper advertisements showed homes with H-shape plans, integrated or attached carports and low pitched gable roofs. The Attilio Castellettis were the first residents to move into Aikahi Park on November 18, 1962. It was announced in The Sunday Star-Bulletin and Advertiser, and Centex provided them with a kitchen full of groceries to celebrate the occasion.

In 1964, one of the Ossipoff designed model homes in Aikahi Park won a nationwide model home contest. The award was given by American Builder magazine, which called Model Number 332, a three-bedroom Gold Medallion electric home, a “masterpiece in economical use of space” because of its U-shape plan. The plan allowed all rooms access to the “lanai and rear terrace, yet guarantees privacy and quiet where most needed.” Other praised features included “the simplicity of framing, the wide eaves for sun and comfort control and especially the 46 foot frontage as a boon to the average lot owner.” The home featured a gable-on-hip roof with composition shingles, hardboard and masonry block exterior walls, large picture window sections with jalousie windows below and a two-car garage with storage unit.

An award winning model home, wide streets, neatly manicured yards and friendly neighbors were major reoccurring themes in advertisements for Aikahi Park in 1964. Adding even more to the prestige of the neighborhood was the construction of the new Aikahi Park elementary school and playground, which opened in the fall of 1964.

In May of 1965, the second phase of Aikahi Park began construction with a new developer, Crossco, Ltd., and a new builder, Quality Pacific, Ltd. The “new Aikahi Park” was to be built along Aikahi Place and Aikane Place, and on Aikahi Loop between Mokapu Road and the northern intersection of Aikapa Street. Buyers had four “luxury” home designs to choose from plus a choice of roof style and color selection. According to the developer, these homes were designed to complement homes already in Aikahi Park. Four different models were shown in advertisements featuring hollow tile walls, Wolmanized lumber, three or four bedrooms, and low pitched gable roofs, hip-on-gable roofs and pavilion roofs. The pavilion roof had Asian origins and was widely used in commercial architecture across the country beginning in the mid 60s. Construction types included wood frame, CMU and concrete brick with picture, jalousie and sometimes clerestory windows. Prices of homes in the “new” Aikahi Park ranged from $27,200 to $28,700. By 1966, a new two-story, five bedroom, three bathroom model home named the “Executive 5” was introduced to Aikahi Park by Quality Pacific. This model had an L-shape plan with an attached carport, masonry construction, a gable-on-hip roof and more than 2,000 square feet of living space. Prices for this model began at $36,500.

Although Aikahi Park retains its original signs, rooflines and park-like feeling, many of the homes have been altered. A small number of the homes have been demolished and replaced with larger two-story homes, and an even smaller number have larger second story additions. A number of the homes retain original windows, although some have been replaced with vinyl casement, awning or double hung windows. Several carports have been enclosed with period inappropriate garage doors. Vinyl or lava rock privacy fences are common in the development. As a whole, roughly 15% of the homes have been either demolished and replaced or added to in a manner that alters their original plan. 60% of the remaining original homes have altered windows or garage doors. Because of the widespread replacement of windows that are not in kind with original placement or operation and the addition of period inappropriate garage doors and vinyl privacy fences throughout the development, Aikahi Park is not eligible as a State or National Register district.

Advertisement in The Sunday Star-Bulletin and Advertiser, Oct. 7, 1962.

Four Model Homes Are On View In Aikahi Park,” The Sunday Star-Bulletin and Advertiser, May 2, 1965.

Advertisement in The Sunday Star-Bulletin and Advertiser, Aug. 28, 1966. 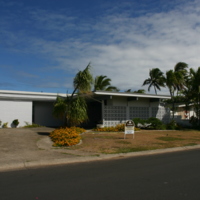 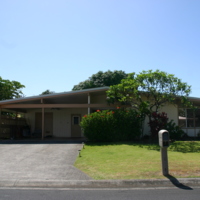 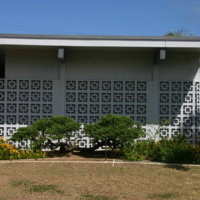 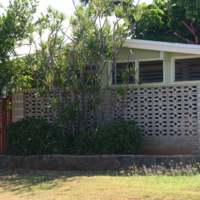 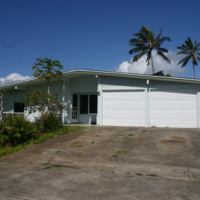 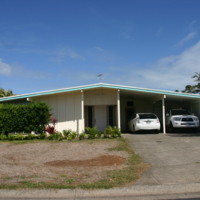 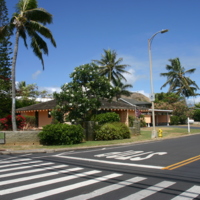